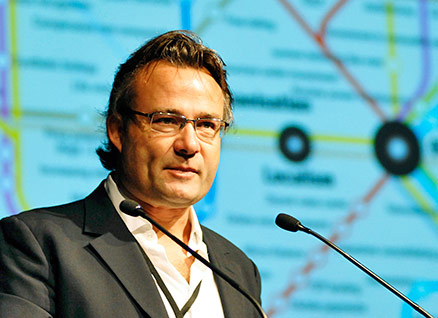 What’s Next is published by Richard Watson, a futurist speaker, author and scenario thinker who helps organisations to think further ahead, especially about emerging growth opportunities and risks.

Richard has worked with the Tech Foresight Practice at Imperial College London and London Business School and is co-founder, along with philosopher Professor Roger Steare and strategist Nick Turner, of Thinking Allowed, a 24-hour retreat from the non-stop noise of working life. Richard is also the author of five best-selling books, including Digital Vs. Human.

He is currently a visiting researcher at the Centre for Languages, Culture and Communication at Imperial College London.

View a list of Richard’s previous talks. If you’d like to book Richard as a speaker for your conference, strategy offsite or scenario workshop, or to find out more information, please send him an email.

To view selected articles by Richard Watson please follow the links below. Note that a few interview pieces are included and also that some of the original links have disappeared and have been replaced with secondary links and PDFs.

A futurist’s guide to managing the dire present
A review of what Richard is up to nowadays, from QZ.com in the US.

Why companies die
Richard looks at why the average lifespan of companies has fallen so dramatically in recent times.

A futurist told us a pandemic would cancel all travel – here’s what he says will happen next
An interview with Greg Dickinson at The Telegraph.

Fake cities, passenger drones and the death of Instagram – 12 predictions for the future of travel
Another interview with Greg Dickinson.

The Glass Cage and the Future of Automation
It’s not rogue robots that we need to worry about, but unseen automated systems

In Our Own Image
Is artificial intelligence going to save the human race or destroy it?

The Future of UK Public Libraries
What’s the future for public libraries?

Why Companies Die
Why is it that the average lifespan of an S&P 500 company in the US has fallen from 67 years in the 1920s to just 15 years today?

Timeline of Failed Predictions (Part 2)
What might people live to regret saying in the future?

The Future of Money
Will phones be the new banks?

Retail Therapy
Is the future of shopping a dystopia? The choice is ours.

The Future of Newspapers
In this age of user-generated content and citizen journalism, it might seem like newspapers are becoming yesterday's news. But there's more life in them yet.

Open Innovation and Other Foolish Ideas
The best ideas are often conceived of by trial and error, or even just by accident. Open source innovation can be the best path to discovery — if you aren’t afraid to take the plunge.

An Evolutionary Approach to Innovation
Need to kickstart your innovation practices, processes, and production? Take a hint from the world of biology and consider how evolution -- idea Darwinism -- can help inspire change and creativity.

Why Smart Companies Do Dumb Things
Do successful companies sow the seeds of their own destruction?

Have I Got Your Full and Undivided Attention?
Life is speeding up and we are constantly inventing new ways to make things move even faster. But what are some of the consequences of this constant busyness? Are we losing our ability to think and properly relate to other people?

Don't Confuse Creativity with Innovation
Can anyone be creative? Companies and consultants alike say the answer is yes.

Five Trends That Will Transform Society
Globalization, polarization, and more

Why Good Ideas Go Bad
Why do some smart people make stupid mistakes?

The Rise of Connectivity Addiction
Are we becoming hopelessly addicted to our devices?

How to Have an Idea
Is your brain blocked? Don’t worry, the solution could be as easy as taking a bath

Are Open Plan Offices Damaging Our Thinking?
Open plan offices could turn out to be a terrible idea

A New Age of "Innocence"?
The experts who'll drive innovation are not the usual suspects

Bite-Sized Innovations
Sometimes the most powerful ideas start small. Here's a roundup of our recent favorites.

The Trendspotting Trend
Has market research been democratized? Identifying new product, service, and business development opportunities might be as easy as exploring your immediate surroundings -- and talking to your customers.

The Future is a Mixed Bag
With every downside, there is a corresponding upside: Get an expert's take on how technology, connectedness, globalization and ageing will affect us in the future.

Celebrate Failure
You don't read about failure very often. Why is this? What are we afraid of? It is the proverbial elephant-in-the-boardroom. And yet by being scared of failure, we are missing a great opportunity.

Keep It Simple
Time famine, Too Much Information, Too Much Choice and Too Many Options.